This trip has been absolutely phenomenal from inception, through execution and I’m pretty sure it will live on as one of my favorite vacations of all time! Back in January, I had decided to leave The Book of Mormon and after finding and booking a great deal for the European Adventure, I came across Wow Airlines‘ amazing deal to Reykjavik. For only $300 (plus a trip to Boston, one of my least favorite cities based entirely on the football team) I could come to Iceland. A few folks in my travel group had been talking about it and the pictures you see online are stunning. So what the heck, it meant I would get a nice long break of 6 weeks before going back into the workforce, I thought! So I posted on facebook:

And within minutes, Drew replied that he was in. And while we had become facebook friends and frequent “likers” on each other’s pages, we had only met briefly once in LA through a mutual friend. Next came Amber, my cousin. We’ve talked many times about traveling but have never been further than Chicago together so this was going to be a new journey for us. And then Lindsey, one of my dearest friends from a show I did five years ago. Within 2 hours of posting, flights were booked and we were set.  With a few weeks to go, a good friend from college, Holly, sent a message while I was in Europe. Where will you be Oct. 13-17 she asked? A few hours later, she had a ticket and completed our crew headed to the Land of Fire and Ice!

Although at different times, we all arrived to Iceland and took up our places in our amazing airbnb and basically set off to explore! Truthfully a few hours passed before it really hit me. Four friends of mine who had never met before were going to be living and exploring this foreign land together. Someone asked how we all knew each other and with four eyes fixed on me, it meant a lot of responsibility to make sure everyone had the vacation of a lifetime. For me, it was one stop of many on my #cescapade. For them it was their a fully thought out vacation that likely would be the only one for several months. Take about pressure! So in typical Cessalee form, I stated worrying about the schedule and who needed to be where and when. And taking time to tick off all the boxes that my travel books and online research had turned up. And for three days or so we went around doing all of the stuff we “needed” to do. And I don’t mean to downplay that, they are high on the lists because they are awesome! The Blue Lagoon, Hallgrimskirkja, Þingvellir, Scuba diving the Silfra Fissure and more filled our days with so much more excitement and beauty than we could have expected.

Lindsey, Drew and Me at the Hallgrimskirkja

Making Friends in the Blue Lagoon

But then we started to really explore. And the need for “planning” went out the window. Our scuba instructor Byron, wonderful man, suggested we take a trip down towards Stokkseyri; he claimed that the best restaurant he had ever been to was in this tiny little town and we needed to go. And from a man who has lived all over the world as a dive instructor and an advocate of humane food preparation, we trusted his opinion of seafood. THANK GOD we did! Holy cow, the lobster at Fjörubordid was unbelievable. Out of this world. And I had my first trip to a Black Sand Beach!  And the cave we stumbled upon off the side of the road was equally amazing. The 4th longest cave in Iceland gave us hours of adventure…and a perfect spot for photo shoots on the way to the most epic meal I’ve ever had.

The After. So much lobster.

5 Friends go into a cave…who will come out?

We stumbled upon a flea market on Saturday, wandered into the Art Museum with had this curious display of teddy bears covered in wax. An entire room was filled with all kinds of archways and portraits with varying shapes and sizes of bears, some more worn/loved than others. On our way out, the woman stationed at this exhibit began to talk to us and we learned that Kathy was actually the artist of bears; truths…. She told us about her piece and how each bear was actually donated or rescued from local Goodwills; they represented the stories and secrets of children and in sort of a Pixar movie way, allowed their humans to grow based on the foundation they provided. I’m probably not describing this to make it seem as awesome as it was but man, I surely hope someone out there sees here package and brings it to the US. It was the trippiest, weirdest, but coolest piece I’ve seen in a long time! Amber is in school and in exchange for missing some of her classes, she has to interview entrepreneurs here in Iceland and because Kathy also owns a restaurant and 72 apartments in town, we went to her Korean-Asian-Islandic Fusion restaurant K Bar to eat while Amber did her interview. What an awesome woman! From owning a Montessori School in Berkeley to starting with one apartment for rent to becoming a multi buisness owner in Reykjavik, she has a life well lived! And she set us on one of the best adventures of the trip!

Family Portrait with the Bears

All bears go to Heaven

Drew, Lindsey and I set out to explore the Snæfellsnes Peninsula. Using the notes I could jot down from Kathy, and the Drive it Yourself Map from www.IheartReykjavik.com, we set out for an adventure. What a day this was. The scenery was beautiful. Thankfully I was driving because I stopped the car no less that 821 times to take a picture. It was like you saw something and thought, nothing could be more beautiful than this spot. And you kept thinking that until exactly 7 seconds later when you saw something more stunning. The worst part of that trip was when a car was behind me or I was on a bridge and couldn’t stop the car in the middle of the road for a photo! We hit a few of the must do spots, with a 6 hour round trip drive without stops, we knew we wouldn’t be able to see everything on everyone’s lists. But for me, the most magical part of the trip was finding the double waterfall. Don’t ask me where we were, don’t ask me how to get back there, but somewhere between the Crater and Kirkjufell there is this little spot between a sheep farm and a sheep farm where you can climb into the waterfall. It wasn’t on the map, or a list, or suggested at the visitor center (we needed a bathroom…stat!), or by Kathy. There were no plans to see it. We just stumbled upon it. So it was ours. We made our own way. 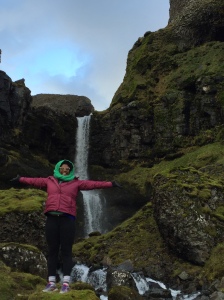 Living in the glow of the moment! 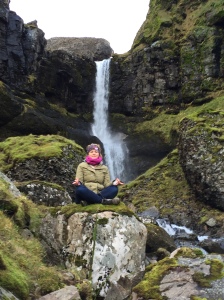 Lindsey took a moment of intention.

Drew was just being Drew! Excitable as always!

There is so much beauty to see here in Iceland. I truly hope to come back and explore even more of this awesome country. But until then, I’ll keep the memories of the day I decided to chase waterfalls. 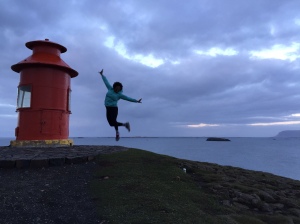